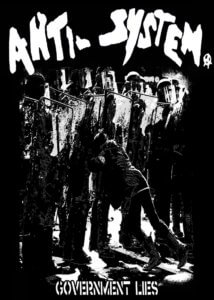 P(E)ACE THRU CH(A)OS ,anti system were a original 80s anarcho punk band after initial first core members of phil dean simon nolan and dominic watts , phil parted ways with nogsy and me varik after a turbulant start ,having john peel playing the debut single of the forming members , mickey knowkes keaving bass dutys and being replaced by mark keane ,mickeys freind liam tryed vocals shortly but gave it up quikly , his replacement was mick Teale my elder brother ,then i came over from morbid humour to play with both of the bands ,theis was the line up for no laughing matter album and the 12in a look at life , the band split up at that period by the original member phil dean until reformation ,mickey joined me and mark keane for a while , things took there course , anti system today are , ady and yaga crawford vocals and bass , myself guitar , vox , trying , with drum hrlp from kev frost , stevie james ,andy burden , paul chillo child ,a plethora of talented hardcore drummers ,adam robinson joined us for our last gig in mulheim germany ,ore lockdown , we are waiting to get back to olaying shortly hopefully