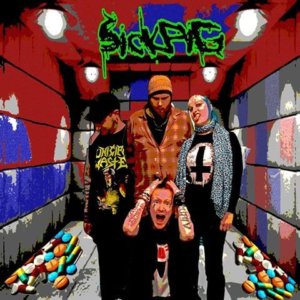 SiCKPiG are a hardcore punk band from Bridgwater, Somerset, England. Started in 2010 by Bassist, Luna Skull and singer Virus. Shortly after, guitarist Mad Dog joined and then drummer T-Beat who left and was replaced in 2015 by Phil Billious. SiCKPiG call their sound ‚Scumpunk‘ and believe that we as humans have to first realize and face it up to the fact that we are all scum to overcome arrogance before we can better ourselves and our environment. The sound is a vicious attack on everything they see as wrong with the world and the human condition and use it as an outlet to purge themselves of the feeling of contempt and the poison that has built up within them. SiCKPiG have released one full length album (MiSANTHROPY), and two EPs (Death to Sickpigs and The Purge). A split with Boycott the Baptist and 51st State is due for release summer 2020 and they are working on their second full length album to be released as soon as possible.